Summer of Logic: Dresden Researchers Win Prizes at the Biggest Meeting of Logicians Ever

Summer of Logic: Dresden Researchers Win Prizes at the Biggest Meeting of Logicians Ever 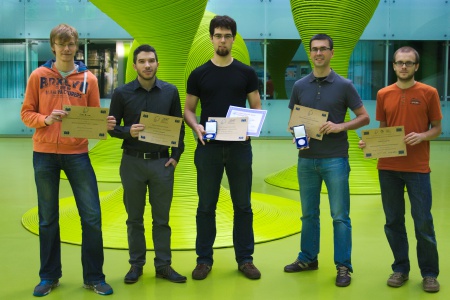 Several prestigious awards have been brought back to Dresden when researchers returned from the Vienna Summer of Logic. The occasion was provided by an event of historic dimensions: over 2500 participants, 12 conferences, and numerous workshops and fringe events made VSL the biggest logic congress in history. Part of the overall event were the first Olympic Games of Logic, which had software systems solve logical problems in 43 problem domains, thus giving an impressive illustration of the practical results of logic research. Thereby a total three of the heavily contested Gödel Medals were won by Dresden researchers.

Norbert Manthey, researcher at the Knowledge Representation group, won first prizes in multiple competitions when solving propositional logic satisfiability problems. He celebrates his success together with Peter Steinke (Knowledge Representation) and Enrique Matos Alfonso (4th semester Computational Logic), who contributed signficantly to the winning systems Optimax and Riss Blaxbox. The two medals that the team could take home are only part of the overall success: overall, the group achieved ten top-3 results in five different competitions.

Another Gödel Medals was won by Markus Krötzsch, Emmy Noether research group leader, together with colleagues from the universities of Ulm and Oxford. Their system ELK came first in classifying large description logic knowledge bases that are of practical importance in the life sciences.

Besides these applied works, however, excellent foundational research was also awarded in Vienna. Stefan Borgwardt, doctoral researcher in the Automata Theory group, received the Distinguished Student Paper Award of the annual Description Logic Workshop for his work on fuzzy description logics.

These successes testify to the international standing of TU Dresden in the research fields of logical knowledge representation and artificial intelligence. The logical goal of the winners will be to ensure this status in the years to come.
Retrieved from "https://iccl.inf.tu-dresden.de/w/index.php?title=News10/en&oldid=5499"