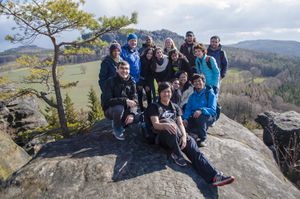 The International MSc Program in Computational Logic is truly international, with students coming from numerous different cultures. It is an endeavor of the International Center for Computational Logic (ICCL) to create an ambience where students and staff can intermingle freely and exchange ideas - whether the ideas come from the field of Computer Science or from the diversity of several cultural banners studying under one roof, the Center provides several opportunities to students to come up and discuss them.

In addition to the weekly research seminars, we at the ICCL organize social events, special tours and excursions from time to time.

Hiking tour through Upper Häntzschelstiege in the Saxon Switzerland
November 2, 2011

Retrieved from "https://iccl.inf.tu-dresden.de/w/index.php?title=MCL/Social_Events/en&oldid=31038"
Category:
This page was last edited on 17 July 2020, at 14:40.
Privacy policy
About International Center for Computational Logic
Disclaimers
Accessibility