News from the research group Knowledge-Based Systems of October 14, 2018 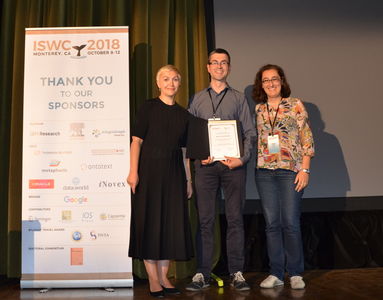 Researchers of the Knowledge-Based Systems group have won the Best Paper Award of the "In Use" Track of the 17th International Semantic Web Conference (ISWC) in Monterey, California. Their work "Getting the Most out of Wikidata: Semantic Technology Usage in Wikipedia’s Knowledge Graph" describes how information from Wikipedia's sister project Wikidata could be made more accessible with the help of a graph database. The public query service that has been built for this purpose was developed in 2015 in collaboration with Markus Krötzsch, and is meanwhile in intensive use: over 100 million requests are answered each month. The service thereby enables many practical applications, ranging from easy-to-use mobile apps to complex data analyses. The query service is operated by the Wikimedia Foundation, which also runs Wikipedia and Wikidata, and with whom the researchers from Dresden are in close collaboration.

The Dresden team, which besides professor Krötzsch also includes Adrian Bielefeldt, Julius Gonsior and Larry González, was also interested in what is really behind those millions of queries. To this end, they analysed their precise structure and content, and obtained insights into the usage of the underlying SPARQL query language, which are in parts rather different from previous assumptions. After careful anonymisation, the analysed queries could be made publically available to other researchers. The work has been supported by the Dresden-based Collaborative Research Centre 912 "HAEC", where the results will contribute to the development of energy-efficient graph databases.

The International Semantic Web Conference is the leading international gathering in the area of semantic technologies and knowledge graphs. The annual event is a forum for current foundational research, new applications, and relevant new resources (data sets, software). One best paper award is conferred in each of those three areas. This year's programme consisted of 62 accepted contributions that have been selected from a total of 254 submissions (24% acceptance rate). In 2019, the conference will take place in Auckland, New Zealand.

Retrieved from "https://iccl.inf.tu-dresden.de/w/index.php?title=News38/en&oldid=26292"
This page was last edited on 16 August 2018, at 14:50.
Privacy policy
About International Center for Computational Logic
Disclaimers
Accessibility